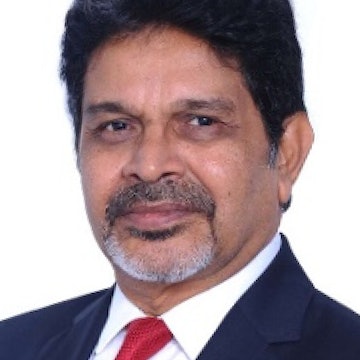 His Excellency Abdul Ghafoor Mohamed was appointed to the post of Foreign Secretary by His Excellency President Ibrahim Mohamed Solih on 22 November 2018.

An accomplished diplomat, Ghafoor has served the Ministry of Foreign Affairs of Maldives, both at headquarters and in a number of foreign postings. Starting his career as a Program Officer in 1983, he has held the post of Assistant Undersecretary, Assistant Director, Political Affairs and Deputy Director and Director, Foreign Relations, at the Ministry. In 1997, Ghafoor was deputed to serve in the Secretariat of South Asian Association for Regional Cooperation (SAARC) as Director from Maldives. Following his 3-year tenure at the SAARC Secretariat, Ghafoor was appointed Director General at the Ministry of Foreign Affairs in 2000, and was later promoted to the rank of Assistant Executive Director in 2005 and then to Executive Director in 2007.

From 2013 till 2014, Ghafoor served as a Consultant at the Foreign Relations Department of the People’s Majlis (Parliament), aiding the legislature in fostering international cooperation and engagement. During the period 2014-2017, Ghafoor served as Director, Special Projects at ADK Enterprises Pvt Ltd, and as the Head of External Relations at the newly established Tree Top Hospital in Hulhumale, gaining experience in the private sector. An individual with a keenness for academia, Ghafoor also lectured at the Maldives National University from 2016 to 2018 in the subjects of Political Science and International Relations.

Ghafoor graduated from the University of Tasmania, Australia, in 1984 with a B.A(Hons.) in Political Science, and was awarded an M.A in International Relations from the Fletcher School of Law and Diplomacy, Tufts University, USA in 1988.

Born on 20 November 1959, Ghafoor is married to Mariyam Khalida. They have a son and a daughter.