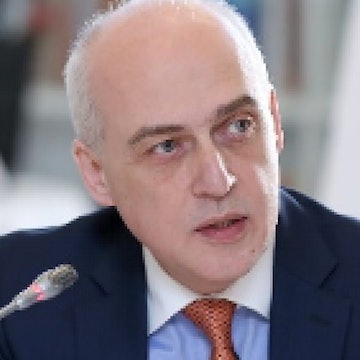 David Zalkaliani (born on 27 February, 1968) is a Georgian career diplomat serving as the Minister of Foreign Affairs of Georgia since 21 June, 2018.

Career
Soon after Georgia regained its independence, in 1992 Zalkaliani joined the Ministry of Foreign Affairs, served as an Attaché in the Department of International Organizations, subsequently in 1995 was promoted to the Deputy Head of Division at the same department.

During the above period, it was of utmost importance for Georgia to find its own place in the system of international relations and join the international organizations. During the same period Georgia started cooperation with the European Community, which in 1992 recognized Georgia’s independence. Back in those years cooperation between Georgia and the European Community was mainly focused on humanitarian and technical issues, in which Zalkaliani was actively involved.

From 1996 to 2000, Zalkaliani served as a Counsellor at the Embassy of Georgia to the Republic of Austria. He took part in the negotiating process on the text of the Agreement on Adaptation of the Treaty on Conventional Armed Forces in Europe. He participated in various important high-level summits, including the Budapest Summit of 1994, the Lisbon Summit of 1996 and the Istanbul Summit of 1999. Zalkaliani actively participated in the process of negotiations for the withdrawal of Russian military bases from the territory of Georgia. During Zalkaliani’s diplomatic mission in Austria, Georgia was represented in Vienna by prominent Georgian diplomat, Ambassador Levan Mikeladze. Later, Zalkaliani joined Mikeladze, when Mikeladze became actively involved in social and political activities.

In 2000-2001, he continued serving as a Counsellor at the Department for European Affairs of the Ministry of Foreign Affairs of Georgia. Deepening of bilateral cooperation with the European countries fell under his duties and responsibilities.

In 2001-2002, Zalkaliani returned to Vienna to assume the position of Deputy Permanent Representative of Georgia.

In 2002-2004, Zalkaliani served as a Senior Counsellor at the Embassy of Georgia to the United States, Mexico and Canada; during his tenure, US-Georgia defense cooperation was considerably intensified.

In 2004 Zalkaliani continued his diplomatic career in Uzbekistan having served as an Ambassador Extraordinary and Plenipotentiary of Georgia to the Republics of Uzbekistan and Tajikistan. In the above period the bilateral relations between the countries were considerably intensified in the political and economic fields.

In 2007 Zalkaliani was appointed as Director of the Department of Global Relations of the Ministry of Foreign Affairs of Georgia. Over the next year he assumed the position of the Ambassador-at-large.

In 2008 he was appointed as an Ambassador Extraordinary and Plenipotentiary of Georgia to the Republic of Belarus.

In 2009 Zalkaliani left his position as an Ambassador and with like-minded people entered the politics. He actively participated in the creation of the political party – “Free Democrats”, that was followed by the victory of the Georgian Dream coalition in 2012 parliamentary elections. In parliament “Georgian dream – Free Democrats” faction was created. The same year Zalkaliani becomes First Deputy Minister of Foreign Affairs.

Since his appointment as the first Deputy Minister of Foreign Affairs, along with other important directions, David Zalkaliani was actively engaged in the process of preparation of the Georgia-EU Association Agreement being the Chief Negotiator from the Georgian side. Negotiations were successfully completed on 27 June, 2014 with the signing of the Association Agreement, between the European Union and Georgia, which includes a Deep and Comprehensive Free Trade Area (DCFTA) component. From 2012 to 2014 Zalkaliani was a Chief Negotiator from the Georgian side in the Geneva International Discussions and Co-Chair of the working groups of U.S.-Georgia Charter on Strategic Partnership.

In 2015 Zalkaliani continued his diplomatic career as an executive director in the newly founded Levan Mikeladze Foundation. During his tenure, his activities included research of the public politics, and advocacy projects implementation, capacity building for diplomats, holding academic and public discussions on foreign policy priorities.

Diplomatic Rank
In 2007 Zalkaliani was granted the diplomatic rank of Ambassador Extraordinary and Plenipotentiary.

Education
In 1992 he graduated from Ivane Javakhishvili Tbilisi State University majoring in international law. He is fluent in English and Russian.

Family
Zalkaliani is married and has two daughters.