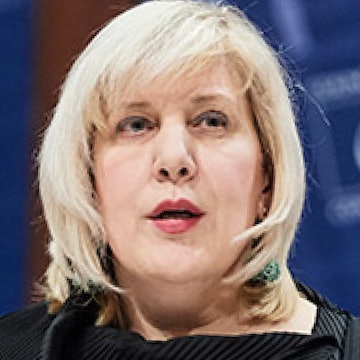 National of Bosnia and Herzegovina, she has been working to promote and protect human rights for the past two decades, thus acquiring extensive knowledge in the field of international monitoring, in particular as regards freedom of expression.

Prior to her appointment as Commissioner for Human Rights, she has served as OSCE Representative on Freedom of the Media (2010-2017), Director of Broadcast of the Communications Regulatory Agency of Bosnia and Herzegovina (2001-2010), Chair of the European Platform of Regulatory Agencies (2007–2010) and of the Council of Europe's Group of Specialists on Freedom of Expression and Information in Times of Crisis (2005-2007).

Dunja Mijatović has regularly given lectures in national and international fora and has been awarded several human rights prizes. She has also been active in supporting NGO activities in the field of human rights education and asylum.

Opening Plenary: Open and Accessible Internet for All

Watch
The Opening Plenary of the Freedom Online Conference will focus on the current challenges and opportunities for achieving open and accessible internet for all. The Plenary will discuss the progress toward global connectivity, overcoming existing digital divides and growing digital authoritarianism, and the steps toward achieving open and accessible internet and human rights for all.
Freedom Online Coalition Ulkoministeriö Utrikesministeriet
Terms of Service