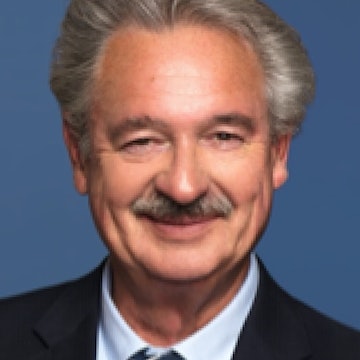 Minister of Foreign and European Affairs and Minister of Immigration and Asylum, Luxembourg

Jean Asselborn was born on 27 April 1949 in Steinfort.

Education and qualifications
After leaving school at the age of 18, Jean Asselborn resumed his studies in 1976 by attending evening classes. He obtained his final secondary school diploma from the Athénée de Luxembourg the same year.

In October 1981, Jean Asselborn was awarded a master’s degree in private judicial law from the University Nancy II.

Governmental posts
Following the legislative elections of 13 June 2004, Jean Asselborn joined the government as Deputy Prime Minister and as Minister of Foreign Affairs and Immigration on 31 July 2004.

Upon the continuation of the coalition government formed by the Christian Social Party (CSV) and the Luxembourg So-cialist Workers’ Party (LSAP) after the legislative elections of 7 June 2009, Jean Asselborn retained the offices of Deputy Prime Minister and Minister of Foreign Affairs on 23 July 2009.

In October 2012, at his instigation, Luxembourg was, for the first time, elected to a non-permanent seat on the United Nations Security Council for 2013 and 2014.

Following the legislative elections of 20 October 2013, Jean Asselborn was appointed Minister of Foreign and European Affairs and Minister of Immigration and Asylum on 4 December 2013 in the coalition government formed by the Democratic Party (DP), the LSAP and the Green Party (déi gréng).

After the legislative elections of 14 October 2018, Jean Asselborn was appointed Minister of Foreign and European Affairs and Minister of Immigration and Asylum on 5 Decem-ber 2018 in the coalition government formed by the DP, the LSAP and déi gréng.

Other political posts
A member of the LSAP since 1972, Jean Asselborn was the mayor of the municipality of Steinfort from 1982 to 2004.

At national level, Jean Asselborn was elected to Parliament for the first time in 1984 as candidate for the LSAP in the con-stituency of the South. He served as Member of Parliament until 2004. He assumed the role of chairman of the LSAP par-liamentary group from 1989 to 1997, as well as the responsi-bility of vice president of Parliament from 1999 to 2004.

In addition to his parliamentary mandate, Jean Asselborn was a member of the European Committee of the Regions from 1999 to 2004.

He also served as vice president of the Party of European Socialists from 2000 to 2004.