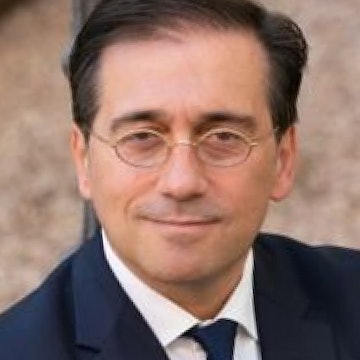 Minister of foreign affairs, the European Union and Cooperation, The Kingdom of Spain

Mr. Albares was born in 1972 and is a career diplomat. He holds a Degree in Law from Deusto University, specializing in Economics and Law, with a Diploma in Business Science. He also holds a Diploma in National Defence Studies from Spain’s Centre for National Defence Studies (CESEDEN), and a Diploma in Cultural Management Abroad from Carlos III University, in collaboration with Spain’s Diplomatic School. He founded and coordinated the Spanish think tank Círculo de Reflexión Internacional.

Before his appointment as Minister, on July 10, 2021, he served as the Ambassador of Spain to the French Republic and the Principality of Monaco.