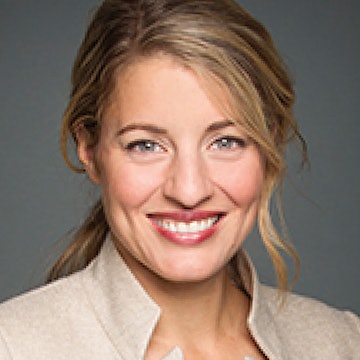 The Honourable Mélanie Joly was first elected to represent Ahuntsic-Cartierville in the House of Commons in 2015. She has previously served as Minister of Economic Development, Minister of Tourism, Official Languages and La Francophonie, and Minister of Canadian Heritage.

In her ministerial roles, Minister Joly has worked to promote Canadian culture, and to grow and increase the visibility of Canada’s tourism sector. She has also worked to safeguard Canada’s two official languages while promoting the use of French in Canada and around the world, including in the digital sphere.

Prior to entering federal politics, Minister Joly founded the Vrai changement pour Montréal party and ran for mayor of Montréal in 2013 under its banner.

Minister Joly holds an Honours Bachelor of Law from the Université de Montréal and a Magister Juris in European and Comparative Law from the University of Oxford. She is the author of Changing the Rules of the Game, in which she shares her vision for public policy and civic engagement. She was named a Young Global Leader by the World Economic Forum.
Freedom Online Coalition Ulkoministeriö Utrikesministeriet
Terms of Service