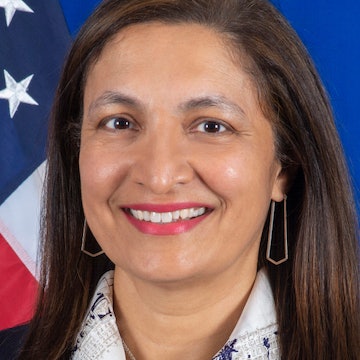 Under Secretary for Civilian Security Democracy, and Human Rights, U.S. Department of State

Uzra Zeya, a diplomatic and non-profit leader with over 30 years of international affairs acumen, served as Deputy Lead for the State Department Agency Review Team for the Biden-Harris Transition. From 2019 to 2021, she served as President and CEO of the Alliance for Peacebuilding, a non-partisan global network of 130+ organizations working in 180+ countries to end conflict by peaceful means.

During her distinguished 27-year Foreign Service career, Ms. Zeya served as Deputy Chief of Mission and Charge d’Affaires in Paris; Principal Deputy Assistant Secretary and Acting Assistant Secretary in the Bureau of Democracy, Human Rights, and Labor; Chief of Staff to the Deputy Secretary of State; Political Minister-Counselor in New Delhi; and Deputy Executive Secretary to Secretaries of State Rice and Clinton. She also served in Syria, Egypt, Oman, Jamaica and various policy roles at the Department of State.

Ms. Zeya is a Life Member of the Council of Foreign Relations (CFR) and co-authored a 2020 CFR report on Revitalizing the State Department and American Diplomacy. Her insights on U.S. diplomacy, human rights, and national security policies have been highlighted in Politico, Foreign Affairs, the New York Times, the Washington Post, and international media.

Ms. Zeya speaks Arabic, French and Spanish. She has a Bachelor’s Degree from Georgetown University and is the recipient of several State Department Superior Honor and Senior Performance awards, the Presidential Rank Award, and the French Legion d’Honneur.

Watch
This event will serve as the launch of the FOC’s Task Force on Internet Shutdowns. It will begin with a brief description of the task force’s structure and mission, led by speakers from the U.S. Department of State, Access Now, and the Global Network Initiative (GNI). These organizations are the task force’s founding chairs. The session will also feature breakout rooms engaging participants in answering two questions: How can well-intentioned governments protect individuals and democratic values online without resorting to Internet shutdowns? And what levers of influence can FOC members and partners use to influence the behavior of states that engage in Internet shutdowns?
Freedom Online Coalition Ulkoministeriö Utrikesministeriet
Terms of Service